How VanMoof recognizes opportunities even in times of a pandemic.

How do companies deal with the corona crisis? In the Customer Stories series, we hold discussions with our customers who are successful despite Corona. Companies with a creative, innovative and successful corporate strategy for the changes in their organization due to the crisis. Simon Herfuth, YoungCapital Account Director, spoke to Pim Vellenga, Operation Manager at VanMoof in Germany. 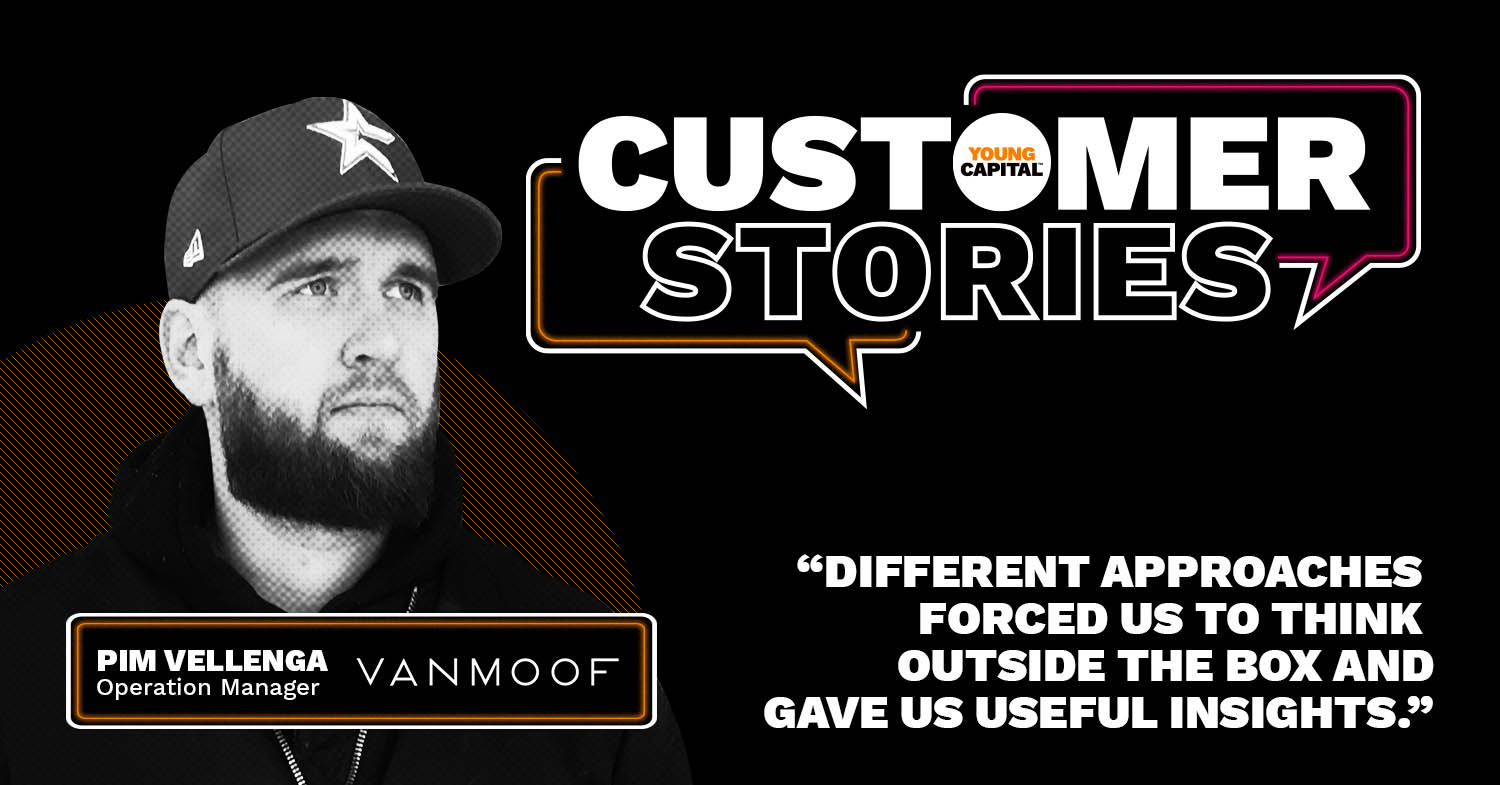 Hi Pim, I'm very pleased that you would like to contribute to our customer stories and share a little of your own story with us and how you have made it on the German market despite Corona. But first things first: What do you guys actually do at VanMoof?

“VanMoof is a bike company founded 12 years ago and is set out to create the most city-approved bike there is. The company was founded in Amsterdam - the most bike-friendly city on the planet with more bikes than people.”

The initial idea to create the most indestructible bike changed later to theft protection and last year a switch was made to full electric bikes. The mission was to get the next billion bums on bikes. Travelling within cities probably has to change in the near future to be more bike and pedestrian friendly. We try to facilitate that as much as possible and try to make commuting in the city as easy and comfortable as possible.

This year, with a big drop in our pricing, we appeal to a broader audience and across Germany and also Europe, with the core market shifting a bit. For the first time, Germany has become the biggest market with Hamburg as the 2nd biggest city on sales worldwide right after Amsterdam. Also, our services had to change. Now there are a lot more people that want to try the bike before they buy it. The sale took place mostly online and only 5-10% were sold in a physical location and this year it was more than 30% that were sold at physical locations.”

As a company, especially in times of Corona, you have to deal with internal and external changes on a regular basis. Big and small. Is there a significant change that your company has been confronted with?

“With all of our marketing and promotional efforts, trying to get as many people on bikes as possible, we had an initial pop-up  project set up of 3 weeks with over 20.000 test rides in approximately 30 locations all over the globe. With the emergence of the coronavirus and all the things that were going on in the US for example, we had to adjust and change the game plan. Not only for the brand stores, but also for the pop-up project. We extended the time span because we could only allow x amount of people at the same time in a location. We could not have 20 people in the same place and still guarantee a safe environment. And so the 3-week project became a 6-month project in order to still allow those test rides to happen, and in the end we still met our targets with more than 30.000 test rides.”

What did you perceive as your greatest challenge?

“The planning side of the changed project, for sure! We had to implement all kinds of planning tools, safety regulations and communicate to the customers that we are not trying to be reckless but still give them the chance to test our latest model in a safe and responsible way.”

Working in pop up stores directly with customers was certainly not easy under these circumstances. And things still went really well this year. So, what did you do differently, and where did it work out great?

“The biggest difference in our approach was to create an outlet sale in order to clear out the warehouse for the new model right when Europe went into lockdown. This had already been planned for 6 months. When we saw how rapidly the sales went, we predicted that for the new model S3 as well.

So from doing things on the fly, and getting it out there to see what happens, we then sat down and discussed game plans and worked out our strategies in more detail. To handle the hype and growth that we were experiencing, we faced a lot more operational challenges than we had previously expected. It also did not allow us to do the one-on-one instruction with the customer, explaining how the bike works and leaving the customer with full knowledge of what he is buying, like we usually would. We started to offer home-shipping only, making sure those 30.000 bikes that had been sold got to the customer safely, while also making it safer for our employees, too.

In the pop-up stores, you could book your test ride and an employee would then bring the bike to your home with all safety measures in place to allow a one-on-one meeting. The safety measures included wipes, detergent, masks, and keeping distance. It was a totally different service experience than before. Luckily more people were home now, which made it easier to have them do a test ride while feeling safe at the same time.”

Has working with YoungCapital helped you in such turbulent times? If so, how exactly?

“We pretty soon figured out that we weren't going to be able to supply 30 locations with our internal staff and that there was no way around working with agencies. With Germany being the biggest market, we first build a partnership with YoungCapital here and afterwards also in the Netherlands, which speaks for itself. The support we got from YoungCapital did not only facilitate the recruiting process itself, but you also made sure that we have the right candidates in the right places, and you took over the onboarding process. I think our work with YoungCapital in Germany is already a great example of how we would like to see future partnerships as well. We gave YoungCapital a briefing, telling you which kind of candidates we need, when we need them and what we need from them... and could then focus on what we do best without worrying about the recruiting process. Also, the weekly meetings helped to give feedback or advice when necessary and to update each other.”

How do you feel about working with YoungCapital in general, and what do you particularly appreciate about it?

“I mostly appreciated that I had one point of contact where I could give a briefing and then give approval on the outcome - it was as simple as that. Partnerships with other agencies usually ended up with so much more work for me. And I like to emphasize the flexibility - even if we had to change things last minute, YoungCapital was able to anticipate our needs even on a short term. As much we tried to give notice ahead, it wasn't always possible. So, that flexibility and point of contact were the main upsides that struck out for us.”

Taking a look into the future: we all hope that the crisis will soon be over, we are all already waiting for spring but the uncertainty of the duration remains. What do you take from your experiences?

“Of course we had to adjust a lot, but that gave us valuable insights. We extended the pop-up stores as long as we wanted to and used the project to test a lot of things in a way we otherwise wouldn't even have thought about. That has very much affected our retail strategy. Before the outbreak of COVID-19, we wanted to open 15-20 stores worldwide, but because we had to be flexible and had to adjust a lot, we completely switched that up to the fact that we are now planning multiple scenarios - ranging from seasonal pop-ups to allow more test rides, up to rather short-term service stores for the wintertime in Germany. Or, during spring, summer and early fall, we could not only provide sales and test ride capabilities but also the service capabilities. By doing so, we can test what our foothold in that market is - some cities have developed differently than we had expected.

Doing that project on such a large scale regarding size and duration gave us a lot of insights in different retail strategies that we otherwise wouldn't even have considered. We analyzed the flows, the tendencies of when people come in and when not, what are the influences of our marketing here or there. We had to step out of our comfort zone a lot to see how far we can go. Different approaches forced us to think outside the box and gave us useful insights.”